Putting the Queens Hotel on the Southsea map

A world famous mural map of Southsea referenced by both Google and Pokemon, has a new landmark – the Queens Hotel.

Community artist Mark Lewis had been keen for many years for the iconic hotel building to feature on his colourful mural.

And following a conversation with Director Farid Yeganeh, that dream has become a reality.

“For years I have wanted to include the Queens Hotel because it is such a beautiful and important Southsea building.

“I’ve based my interpretation of the hotel on the future development of the building so it shows the apartments they are planning to build on the top floor – and I’ve even included Farid’s dog Carson,” said Mark.

The mural project at The Strand began back in 1997.

“I used to live in Waverley Road and I was forever seeing tourists standing at the roundabout not quite sure of where to go and the idea struck me that it would be great to create a map,” he said.

With a 99-year lease of the wall secured, the mural will be in place for a long time and with hundreds of personal community stories already captured, it has become so much more than just a colourful piece of artwork.

Top quality Keim mineral paints are used to ensure the artwork can withstand the ravages of wind, rain, sun and salt air and the mural has become a landmark in its own right.

“There is always someone there taking a photo and the council ran a survey that concluded local trade rose by 30 per cent as a result of the mural.

“As a community artist, I like to share and so far 150 people have helped with the painting over the years,” added Mark.

Queens Hotel Director Farid Yeganeh, said: “We are delighted to be part of the mural project – it illustrates our place in the community at the #heartofsouthsea.” 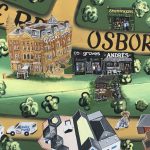 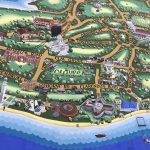 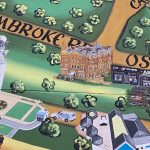 Putting the Queens Hotel on the Southsea map

“I’ve always loved the Queens Hotel,” explained graphic artist, Dave Thompson. ”It’s the colour of the building that I really love – the terracotta and the creamy stonework is amazing and the details are wonderful.” Speaking...

Bored of living AND working from home? Try the new WFH – Working From our Hotel.   Take a seat within our Bar or Lobby and make use of our new, speedy WiFi, receive complimentary parking...

We are working on a plan to re-open The Queens Hotel by 1st March that ensures the safety of our staff and guests and we have completed a risk assessment in line with the latest advice.