Possibly the most striking feature of our beautiful hotel is the 14ft wide hand painted glass dome that sits approximately 23ft over the Lobby. The dome was designed and installed over the lounge at the time of the 1903 reconstruction to be the Queens crowning glory.

Eight marble pillars hold up the ornate cornicing and fruit & leaf gilded plaster carvings that the dome sits upon. Directly above the pillars are a number of ancient murals that link back to Portsmouth’s maritime past, stretching across its entire history. The quartette of images depicts ships from four key eras in this history. The first image illustrates Alfred the Great, The Anglo-Saxon King, clearing the English channel of the Danes before establishing a navy to protect the south coast from Danish raiders. The second illustrates King Edward the Third destroying the French Fleet at Sluys in June 1340 as revenge for a number of attacks on the English coast. This was a turning point in the 100-year war securing English victory. Thirdly is the image portraying the capture of the great galleon St. Nicholas by Sir Francis Drake in the16th Century. The fourth and final mural depicts the British fleets at battle with France, Admiral Lord Nelson is aboard HMS Victory (This ship can still be seen as Head of the Royal Navy in the Historic Dockyard just over a mile along the coast) breaking the French line at the world famous battle of Trafalgar. The four corners of the mural are set in the colours of the sea, with three of them featuring goddesses or maidens of the sea playing harps, while the final one, featuring a painting of a seagull, was possibly added by a later artist.

The glass of the dome itself is set within an oak frame with decorative plasterwork centrally where a chandelier would have originally hung. The glass is split into twelve sections each depicting a month of the year from the Julian Calendar – created by Julius Caesar in 45BC. The calendar was later reformed in favour of the Gregorian calendar, and it is thus unclear why the Julian calendar was used in the design of the dome, considering that Britain adopted the modern Gregorian calendar in 1582 along with much of the rest of the world. The months of the Julian calendar seen in their Latin form on the dome are: Ianuarius (January), Februarius (February), Martius (March), Aprilis (April), Maius (May), Iunius (June), Quintilis (Iulius or July), Sextilis (Augustus or August), September, October, November and December. The glass is decorated with central figures characterised by the signs of the Zodiac surrounded by various elaborate forms of classical decoration such as draped festoons’ and cherubim’s. 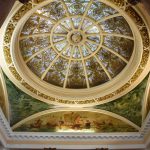 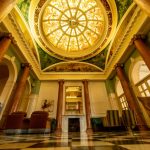 Since 1865 a hotel has stood proudly on this site. Originally built in 1861 by local architect Augustus Livesay, Southsea House was first constructed as a large private home for Sir John and Lady Morris. The...

Thinking of a day out by the seafront? Interested in history? Southsea is a perfect place for you! Come to immerse yourself where the D-Day boats were launched over 70 years on and see how both...